Exploring the last African Garden of Eden – The Ngorongoro Crater

The initial minutes within the renowned Ngorongoro Crater of Tanzania were amazingly summarized up by a young boy guiding a herd of cattle on the crater floor covered with green pastures.

Dressed in red-painted cloth, this young Maasai boy was grazing a herd of nearly two hundred heads of cattle plus goats within this crater swarmed with wild animals. 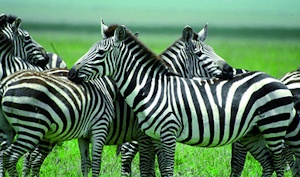 Not far away from the young boy were several zebras grazing, as the intrepid buffaloes were within this very grazing area browsing the fresh grass which had grown following the long rains in the part of Tanzania.

The crater floor is flat and extremely thrilling as I watched zebras grazing close to our vehicle as though they were actually welcoming us into their sanctuary. The crater appeared like a big bowl, crowded with wild animals, offering tourists that visit this part Tanzania ample time to think about the amazing hidden secret Mother Nature.

Similar to the well-known Garden of Eden in the Bible, the Ngorongoro Conservation Area is mainly popular as the last surviving Garden of Eden as well as “Home of Mankind”. In addition, this is the sole place across Africa where man and wild animals have co-existed sharing the land resources in harmony for so many thousands of years.

The perfect nature as well as landscape, the extensive plains beyond the crater edge, as well as the Maasai culture draw in more people to this section of the country, than any other Tanzania location. The Ngorongoro crater has steep wall of 610 meters high which have survived the volcano subsidence, forming a remarkable natural feature. The floor of the crater covers an area of 260 sq km (100 sq miles) of volcanic soil.

Each visit to the floor of the crater entails a risky descent from a forested edge in a 4WD vehicle. Within the crater, you will find permanent water as well as wealthy pasturage maintaining a large resident population of 20,000 to 25,000 large mammals.

Among the species stated as permanent residents within the crater are black rhinos,  giraffes, leopards as well as nocturnal animals. Large ostriches plus thousands of birds that fly over the floor of the crater and the edge

Just as a natural drama, a you may be lucky enough to see a large group of hyenas attacking a huge mature buffalo. To me this was a genuine real-life nature drama. i saw Lions  basking in the warm evening sun, saw hyenas roaming from one place to another, and the rare black rhinos were intensely gazing as tourist vehicles drove by. Take a tour of the Ngorongoro Crater today and enjoy all this great experience that mother nature provides for us.