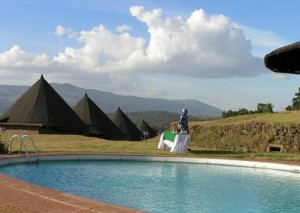 Newer establishments include the Ngorongoro Sopa Lodge and Ngorongoro Serena Lodge, built in the mid- 1990s. The six facilities, all located along the crater rim, have a total bed capacity of 560. The NCAA also has 16 campsite areas. Three more firms, the Whitesands, Kibo Safaris, and Coastal travels intend to establish other facilities within NCA; the new entries will boost the area bed capacity to 1,000.

In addition to the above-mentioned attractions, visitors can also sample cultural tourism or eco-tourism in various Maasai bomas and settlements. Gibbs Farm, located near Karatu along the NCA perimeters, specialises in this. There are also the Endoro River nature trail expeditions, conducted within the Northern Highland Forest Reserve, where visitors can see elephant caves, waterfalls (150 metres high), enjoy bird watching and learn about local flora.

Since 1979, the famous Ngorongoro Crater was known as a World Heritage Site and is located at the eastern edge of the Serengeti in northern Tanzania. The Crater belongs to the Crater Highlands, with vast plains and stretches of bush and woodland areas – creating complex and interrelated ecosystems. The entire Ngorongoro Conservation Area covers about 8300 km2 and next to the famous Crater is the Olduvai Gorge – an area were many fossils have been unearthed. The Ngorongoro Crater has the perfect mix of safari animals, stunning scenery and fascinating history – this area will definitely captivate you During your Tanzania safari experience.

The alkaline Ndutu and Masek lakes in the west of the Ngorongoro Crater are particularly good areas for game viewing during the rainy season from March to May. In the east of the Ngorongoro conservation area are a string of volcanoes and craters and along the southern border is Lake Eyasi, a salt lake around which the Hadzabe people live – who are one of Tanzania’s original ethnic groups. To the north-east on the Kenyan border is the beautiful Lake Natron.

When to Visit Ngorongoro, Weather and Climate