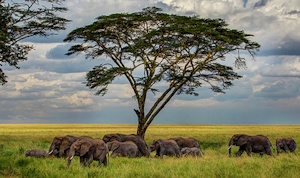 Latest regulatory controls incorporate a U.S. ban on the importation of elephant trophies from Zimbabwe or Tanzania. These African elephant range countries are still mostly characterized by reductions in elephant populations, poor compliance to CITES rules and corruption in the hunting sector plus among governing bodies that implement wildlife laws.

Lazaro Nyalandu the Minister of Natural Resources and Tourism – Tanzania not too long ago visited Texas on the invitation of the Dallas Safari Club – DSC that released a statement that Tanzania’s leading wildlife official claims that the U.S. prohibit on importing ivory won’t control illegal trafficking but rather benefit the poachers.

It is stressing that the club based in U.S. asking foreign governmental authorities to battle back against regulations enforced by its government administration.

In accordance with the Twelve page decision of the U.S. Judge to support the ban, it says that The agency’s announcement didn’t forbid anybody from hunting the African elephants in Tanzania or elsewhere; it didn’t stop plaintiff or any of its members from arranging elephant hunts or generating income through providing services to fans of hunting; and it didn’t restrict anybody’s capability to support elephant conservation.

Meanwhile, The Humane Society is seeking that this ban be widened to include all countries in Africa that permit elephant hunting.

A year ago, the Economists published a report which waved through conservation groups and disproved remarks that sport hunting is a huge industry which benefits the local communities plus country’s economies.

Tanzania featured in their analysis, that revealed that hunting revenue in this country portrayed as a percentage of the tourism revenue was a just 2.3 %, with non-consumptive tourism comprising the balance.

Tanzania was among the 2 leading countries of the 9 included in this analysis which are profiting from non-consumptive tourism. In case tourism revenue is portrayed as a percentage of Tanzania’s GDP it is 6.1 %

Tanzania’s quota is Four hundred pieces (tusks from Two hundred elephants), however, this June, Tourism Minister Nyalandu made progress by cutting the country’s elephant hunting quota to One hundred elephants.

In Tanzania that list of obstructions continues to be evident. A good instance is the latest occurrence of egregious violations of authorized hunting practices by Green Mile Safari Co. Ltd based in Tanzania that was caught on video.

After Minister Nyalandu terminated the hunting license of the company, a representative of this company said that the video was planned by their competitors in the business – the Dallas Safari Club.

As well, the numbers published from Tanzania’s Selous Game Reserve a year ago indicate an 80% decrease, in the past 6 years, of previously the biggest elephant population in the world in one of the biggest protected areas in Africa. The population in 2013 was approximated at 13 084, lower than 2007’s 55 000 and over 109,000 in the late 1970s.