Ngorongoro Board of Directors chaired by Former Tanzanian Amb. to US

Mr. Jakaya Kikwete the president of Tanzania at the beginning of this week has declare the former Ambassador to United States of America as well as prominent lawyer, Ms. Mwanaidi Maajar, as the brand-new head of Board of Directors of the internationally renowbned Ngorongoro Conservation Area found in the northern part of Tanzania. 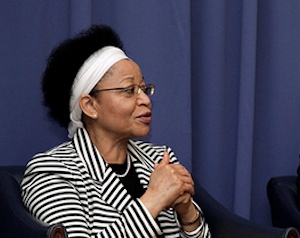 Following her appointment to head the Board of Directors of Ngorongoro Conservation Area Authority, which is among the number one natural tourist sites across the African continent, Ms. Mwanaidi Maajar then joined other policy makers in support of nature conservation.

Mr. Lazaro Nyalandu the Minister for Tourism for Tanzania flagged off this newly appointed board whose primary objective is to advise the Tanzanian government on the finest practices in nature conservation of this area, conservation management as well as advancement of tourism, and the area as a whole.

Well known among the leading lawyers on the African continent, Ms. Maajar, throughout her official duty tour in Washington – DC, has come up and customized a “Discover Tanzania VIP Safari” for a tiny group of executives in the business world from the United States to explore Tanzania each year.

The yearly Discover Tanzania VIP Safari has actually been arranged, guided, and led by former Ambassador Ms. Maajar herself, targeted at exposing the tourism plus investment opportunities of Tanzania to American investors plus tourists.

This Tanzania VIP Safari focuses on a portion of well known business executives from America, seeking to attract as well as motivate them to visit Tanzania not only as tourists but also invest their money in the tourism sector as well as other economic projects.

The United States signifies the biggest single tourism niche for Tanzania, drawing in a record of as many as 58,379 visitors, hence overtaking the standard position held by the market in the UK. Coupled with Canada, the tourist numbers from North America hit the 83,930 mark not so long ago.

The Ngorongoro is among the number one tourist sites in Tanzania’s attracting American tourists, and it has been referred to as the Seven Natural Wonder of Africa, having the largest number of wildlife surviving on the planet. The well known Ngorongoro Crater is habitat to very big numbers of wildlife all through the year and has the most noticeable number of black rhinos still surviving in Tanzania.

Two of the foremost paleontological as well as archaeological sites on the globe – the Olduvai Gorge together with the Laetoli footprint site – are located within Ngorongoro, and additional crucial discoveries could yet to be made within the region.

It is among the most commonly visited tourist places in the country and, as a result, is a crucial economic useful resource to the local residents and the rest of the world.

The multiple-land-use technique is among the very first to be set up across the planet and is copied all over the world as a way of fixing human development plus conservation of natural resources.