The Ngorongoro Crater is an internationally renowned natural amphitheater which was created approximately two million years back when the volcano collapsed and left a 100 sq mile / 259 sq km caldron-like hole. This amazing caldera is protected by a round unbroken 2,000 ft / 610 meters high edge, consists of everything needed for Africa’s wild animals to exist and do well. 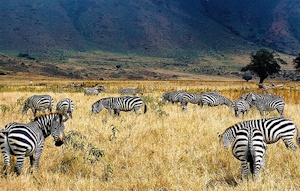 Ngorongoro is found on the ‘northern safari circuit’ of Tanzania, and it receives a large number of visitors who reside in the lodges found on the rim of the crater. The safari vehicles descend down the steep crater walls each morning and the visitors spend several hours down on the grass plains which are crowded with wild animals. Nevertheless, the nighttime is left to the animals as all safari vehicles are required to be out of the crater by nightfall.

There is real evidence of the existence of early man at the Olduvai Gorge, not far from the Ngorongoro Crater. these remains of ‘Homo habilis’ also known as ‘The Handyman’  because his skill of making tools, were discovered back in 1960 by Mary Leakey and they were dated to be about 1.75 million year old. This discovery presented the very first step of man’s existence on the human evolution hierarchy.

At present day it is only the Maasai people allowed to live within the huge 2,500 sq mile / 6,480 sq km conservation area close to this crater. These Maasai people do not cultivate this land since they consider it unbecoming; however, they graze their cattle, which they uphold in a god-like way. It is their cattle that the Maasai people entire survive since they feed on the beef and milk, use the skin as well as use the dung to smooth and decorate the floors plus walls of their huts, also the warm blood which thy extracted from the necks of live cattle, they mix it with milk and feed on it as a very nitrous meal rich in iron.

Animals Plus Birds In The Ngorongoro Crater

At present day, the Ngorongoro crater is home to nearly 30,000 animals, most of which are wildebeests plus zebras.  The crater offers the perfect environment for survival to several predators among which is the lion plus hyenas. Other predators living inside the crater include leopards, 3 types of jackals plus cheetahs. Some of the very few surviving black rhinos in Tanzania can as well be seen here and fortunately sighting have frequently been reported. In addition there are numerous buffaloes which are likewise commonly seen.

On the crater floor is a lake enclosed by the Ngoitokitok swamps, in which are numerous large hippos that remain partly submerged throughout the day and then at night move on land to graze on the grass.

Despite the fact that the Ngorongoro Area has numerous wildlife species, not all of them are found inside the crater. Some of them are better adapted to live in the areas encompassing the caldera.

Clearly there aren’t any Elephants living on the crater floor since they prefer the verdant forested highlands. Occasionally they may be seen at the crater edge but hardly ever go down the crater. In addition, oryx, impala plus topi are absent from the crater along with Giraffes which prefer the acacia umbrella trees.

The white shores of beautiful Lake Magadi are hoem to thousands of pink flamingoes in addition to a great profusion of different water birds such as the black-winged stilts, avocets as well as plovers