Wildlife Animals in Ngorongoro, What To See On Safari 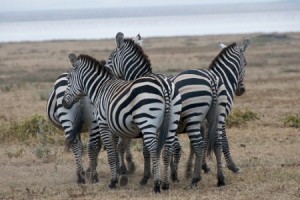 A population of about

, largely ungulates along with the highest density of mammalian predators in Africa, lives in the crater. These include black

amphibius which are very uncommon in the area. There are also many other ungulates: wildebeest Connochaetes taurinus (7,000 estimated in 1994), zebra Equus burchelli (4,000), eland Taurotragus

Gazella granti and G. thomsoni (3,000). The crater has the densest known population of

(VU) numbering 62 in 2001. On the crater rim are leopard Panthera pardus, elephant Loxodonta africana (EN) numbering 42 in 1987 but only 29 in 1992, mountain reedbuck Redunca fulvorufula and buffalo Syncerus caffer (4,000 in 1994). However, since the 1980s the crater’s wildebeest population has fallen by a quarter to about 19,000 and the numbers of eland and

increased greatly, probably due to the long prevention of fire which favors high fibrous grasses over shorter less fibrous types.

In summer enormous numbers of

pass through the plains of the reserve, including

Acinonyx jubatus (VU), though common in the reserve, are scarce in the crater itself. Wild dog Lycaon pictus (EN) has recently disappeared from the crater and may have declined elsewhere in the Conservation Area as well. Golden cat Felis aurata has recently been seen in the

have been recorded within the NCA. These include ostrich Struthio camelus, with white pelican Pelicanus onocrotalus, and greater and lesser flamingo Phoenicopterus ruber and P.minor on Lake Makat in