How to Get To Ngorongoro Crater in Tanzania 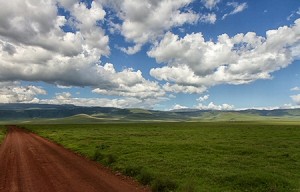 One needs to fly to Kilimanjaro International Airport at Moshi, situated at the foot of Mount Kilimanjaro. From there one can get a charter flight, take a taxi or make use of the free shuttle service. The distance from Moshi to Arusha is about 55km.

Take note: The road from Arusha to Lodoare Entrance Gate is 160km long. As of recently, the entire journey is on tarmac and it takes about two hours. Unless you stay on the main roads, which are graveled, a 4×4 vehicle is essential when entering the Ngorongoro Conservation Area and the Serengeti National Park.

The area contains over 25,000 large animals including 26 black rhinoceros. There are 7,000 wildebeests, 4,000 zebras, 3,000 eland and 3,000 Grant’s and Thomson’s gazelles. The crater also has the densest known population of lions, numbering 62. Higher up, in the rain forests of the crater rim, are leopards, about 30 large elephants, mountain reedbuck and more than 4,000 buffaloes, spotted hyenas, jackals, rare wild dogs, cheetahs, and other felines.

The legendary annual wildebeest and zebra migration also passes through Ngorongoro, when the 1.7 million ungulates move south into the area in December then move out heading north in June. The migrants passing through the plains of the reserve include 1.7 million wildebeest, 260,000 zebra, and 470,000 gazelles. The Lake Ndutu area to the west has significant cheetah and lion populations. Over 500 species of bird have been recorded within the NCA. These include ostrich, white pelican, and greater and lesser flamingo on Lake Magadi within the crater, Lake Ndutu, and in the Empakaai Crater Lake, where a vast bird population can be observed.