When to Visit Ngorongoro, Weather and Climate 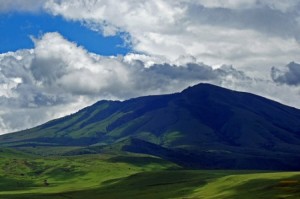 The short rains are from

and the long rains from February to April, the latter generally being considered the off season. However, the

is a very exciting time of year as this is when animals congregate on the Short Grass Plains to have their young.

is usually a good time to see the migration on the plains. In turn, this attracts large number of predators and results in spectacular interactions between predators and prey. Keep in mind that part of the

fall within the NCA.

DRY SEASON (MAY TO OCTOBER)

The dry season holds its own beauty. In Africa the dry season is the best time for game viewing because the animals are concentrated along permanent water sources. Within the Crater game viewing is excellent during this time. However, keep in mind that the Short Grass Plains become completely devoid of game during this season. This is the best time of the year to visit Empakai and Ndutu, which has resident game that remains around the lake all year round.

, huge expanses of savannah, forest and bush land, the

is the flagship of Tanzania’s tourism industry and is the only place on earth where mankind and wild animals coexist in harmony.

Originally part of the

when the latter was established by the British in 1951, in 1959 the Ngorongoro Conservation Area Authority (NCAA) was formed, separating NCA from Serengeti. Land within the area is multi-use, providing protection status for wildlife while also permitting human habitation. Its uniqueness lays in the fact that the NCA is where man, livestock and wild animals live in peace:

can sometimes be seen grazing alongside zebras on Ngorongoro’s grassland.

Had it not become the world’s sixth-largest unbroken caldera, then what is now known as the

could have been a towering volcanic mountain, as high as Kilimanjaro.

The crater is the flagship tourism feature for the

. It is a large, unbroken, un-flooded caldera, formed when a giant volcano exploded and collapsed some three million years ago. The Ngorongoro crater sinks to a depth of 610 metres, with a base area covering 260 square kilometers. The height of the original volcano must have ranged between 4,500 to 5,800 metres high. Apart from the main

, Ngorongoro also has two other volcanic craters: Olmoti and Empakai, the former famous for its stunning waterfalls, and the latter holding a deep lake and lush, green walls.

On the leeward of the

, an active volcano and Tanzania’s third highest peak after

and Meru . Known to local people as the Mountain of God, Mount Lengai’s last major eruption occurred in 2007. At the mountain’s foot is Lake Natron, East Africa’s major breeding ground for flamingos.

The name Ngorongoro is derived from

a Maasai word given to the age group of Maasai warriors who defeated the previous occupants of the area, known as the Datong around the 1800s. The Datong had in turn taken them from their predecessors the Hadzabe (bushmen/hunter-gatherers). The name Ilkorongoro echoed sounds of the bells ‘koh-rohng-roh’ that the Maasai wore during the battle, and it is from this that the name Ngorongoro comes from. Furthermore the Maasai have also given names to the walls known as ‘entiak’ which defines as sheer drop, and the floor as ‘ramat’ meaning heath-land of the crater.

What you need to know before you travel; is when to go to Ngorongoro

Located about 140km southwest of Arusha town, Ngorongoro is a massive habitat, 265sqkm big. Are you in need of viewing the Big Five in Tanzania then all you need is visit this magnificent attractive Ngorongoro, it is not about the Big 5 alone but also the other game and natural wonders found in this area alone a something not to miss out.

Wildlife can be viewed all year round in Ngorongoro since lots of animals converge in the crater but because of that, also there is traffic of the vehicles of other visitors and hence sometimes you are advised to travel during the low season that is if that is your interest. Above all the breeding patterns of flamingos at Lake Magadi, wildebeest migration through the Serengeti plains and the climatic conditions mainly determine when to travel to Ngorongoro plus your special interests as a person.

In addition, some seasons for travel have advantages and a few disadvantages and in these comes also a variation in accommodation prices so prior inquiry is recommendable. Some months like November and December, there are short rains which makes the weather hot and humid hence advised to be aware of the mosquitoes, this means that you carry anti-malarias. During this time the bottom of the crater is cooler hence you are advised to wear warm clothes especially during the mornings and evenings.

From January to February the wildebeests are calving young ones along the Ngorongoro grasslands just outside the crater, this is an amazing time to watch the newly born little ones staggering to their feet after they are born, the mothers shield them is a great experience not leaving out the hungry predators such as the lions, leopards, cheetahs, jackals, hyenas. This offers you great chances of taking amazing photos.

Long rains are received between mid-March and May hence the plains are green and lush, this is a low season and hence also prices are lower, this is an advantage to the visitors interesting in travelling when prices are lower before the season picks up again in June. This season is the best for bird watching and birds such as the freakish secretary birds, Caspian lapwings, Montague’s harriers, splay-footed ostriches, and vultures among others can be spotted.

Game viewing is best enjoyed from June to October since this is a dry season and hence most animals congregate around water bodies and are also clearly seen along the plains in this season. Different wildlife species seen are the Big Five also their prey such as the zebras, wildebeests, antelopes among others is well spotted and there is no interesting time as watching a lion hunt down its prey.

there is no really something like a bad or best time for visiting since most of the wildlife has made the crater their home. So different wildlife species are available throughout the year. Generally you can never get enough of Ngorongoro because every time you visit all your guarantee is only a totally excellent safari!